Episode 1 - The Opportunist and the Interrogator: Insider Help

Hornblower made a big stink about "insider help" given to Harry Browne's campaign in 1996 or 2000, prior to Browne's nomination.  He wasn't nearly so concerned, however, about wallowing in his own stink.

Hornblower decided to run for US Senate sometime in 2001, for the 2002 election season.  In Virginia, the petitioning window to get on the ballot statewide opened officially on January 1, 2002; so his petition drive began at that time.

The question of whether to formally endorse his campaign for US Senate was proposed for consideration at the convention of the LPVA scheduled for April of that year.

With that meeting still months away, and even before the petitioning window even opened, Hornblower was secretly soliciting advice and help from various leaders within the Virginia Libertarian Party, including:

All of these sitting Libertarian Party of Virginia or local affiliate leaders, along with a handful of other Libertarian Party members in the state, began petitioning for Hornblower as soon as the window opened -- long before the state convention.  All of these leaders also began soliciting help on those petitions via various LPVA discussion lists, and at meetings of their local chapters of the LP.  They made petitions available for others to take and circulate at their local LP meetings, and solicited signatures from anyone in attendance who was willing to sign them.

As time went on, the fact -- that sitting LPVA titleholders were behaving as if the Hornblower candidacy had already been endorsed -- became apparent to other Party members in the state, and became an issue for the campaign, because other members began pointing out the hypocrisy of it.

Shelley Tamres, in particular, went above and beyond and recruited phone bankers for Hornblower who then began soliciting volunteers to actively help the Hornblower campaign.  These volunteers actually identified themselves as "calling on behalf of the Libertarian Party of Virginia".

According Charlotte Patrick, who was then an activist with the Shenandoah County (VA) Libertarian Party, the Hornblower petition caller said:


"... she was calling from the Libertarian Party of Virginia, [and] started in with a statement regarding getting ballot signatures for Jacob Hornberger, and I interrupted her before she really got into the pitch.  ...  After my initial "I'm not interested" she asked why, and offered followup suggestions, (is it his position on guns? was the first part).  I declined to discuss it with her.  She ended with "I guess I'll see you at the convention" - [and] mentioned that it should be "interesting." She did say that she had not been with the party long, for whatever that's worth...  She sounded like a college kid.  [She] DID give her name.  I wouldn't put it past Marianne to give a false name, but I wouldn't expect it of Shelley."


Supposing Hornblower is "all about ethics", his minions shouldn't have made it sound like he already had the endorsement and that the LPVA was officially behind him.

Hornblower did not acknowledge any of these objections to his campaign staff suggesting that he was already the LPVA-endorsed candidate until over two months had passed.

Some LPVA members were not in favor of any Senate campaign at all because they were concerned by the cost and toll on activists; some simply didn't like Hornblower and preferred None of the Above (NOTA); and others were simply annoyed that Hornblower's campaign team was behaving like endorsement by the LPVA was already a "done deal", prior to the state convention.

After several months, when it became abundantly clear to Hornblower that he had shat too much in his own doghouse, and the "NOTA" campaign looked more and more likely to prevail at the state convention, Hornblower finally threw in the towel and announced that he would not seek the endorsement of the LPVA, and run instead as an independent.

As it happened, his campaign was was heavily supported by fat-cat lawyers -- more on that in another article, but suffice to say if you go to the FEC website and look up his campaign donors, you can see for yourself.

In his withdrawal statement, he obliquely referenced his campaign's surreptitious practice of using sitting insiders to attempt to preload the endorsement question for him, and their petitioning efforts to assist:

"Everyone should know that almost 100 percent of the 8,500 signatures that I have in my possession have been collected by my associates, my close friends, and me. However, there are those LP members who have collected signatures for me (but haven't yet delivered them to me) or who have committed to collecting signatures for me under the assumption that I would be representing the Virginia Libertarian Party. I want them to know that while I would still welcome those signatures, those volunteers are relieved of any moral or ethical obligation to deliver them to me or to collect any more signatures, given that the commitments and the signature gathering were made under the assumption that I would be running under the Virginia LP banner."

In case it's not clear enough, make sure you understand this part: "... the ASSUMPTION that I would be running under the Virginia LP banner."

By the way, that "almost 100 percent" figure can be fact-checked by an in-person visit to the Virginia State Board of Elections, where past election archives are kept.

"I believe that, at a minimum, members of the national LP staff and LP National Committee should be prohibited from supporting, directly or indirectly, any person who is vying for the LP presidential nomination and should instead remain fair and impartial as between LP candidates vying for the same position. Moreover, I believe that in the off-presidential election years, the LP national office should be devoting its efforts to "base-building" by supporting state and local LP parties and candidates."

It is worth noting that any time a Libertarian seeks the LP endorsement or nomination, there are BY DEFAULT two candidates already: in this case, for US Senate in Virginia, those candidates by default would have been the two-legged prevaricator plus NOTA.

So if Hornblower's own advice were followed, not a single person who held an LPVA title should have either helped or hindered anyone, or NOTA.

But that's not what he wanted it to mean, was it?

Such a fine example of the "Ethics Only When It Suits Me" caucus.

Mystery of the Day: Speaking of Yahoogroups...  Might Hornblower have pulled the trigger on his decision to seek the 2020 nomination when he learned that the trail of documentation of all the victims he rolled over and all the prevarications he made -- which had been preserved in hundreds of email mailing lists that he and his supporters spammed at the time and which were hosted by Yahoogroups -- was effectively going to be eliminated by the closure of the Yahoogroups archives in December?

The Other Mystery of the Day: Why does Hornblower copyright everything he splashes far and wide?  I thought he was supposedly a consistent, radical Libertarian, who asked the state for NOTHING?

There is NO support for copyright or any other kind of IP within the libertarian philosophy.The phrase "intellectual property" is a misnomer. What the state calls intellectual property is more accurately referred to as "intellectual monopoly" - a state-granted monopoly on the use of an idea, or goods and services derived from an idea, to a certain limited group. In other words, a STATE SUBSIDY.  Libertarians call for the elimination of the protection of such state-enforced monopolies thereby freeing the market, encouraging content providers and product developers to improve on existing products thereby bringing more and better choices to the market.

So just how is it that such a "superior intellect" and a libertarian's Libertarian like Hornblower can claim a state-granted privilege and still think of himself as a "Libertarian"?


Just for this rustbucket Hornblower, this article shall carry my usual open license with a specific exception (see below). 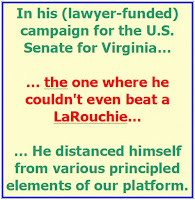